skip to main | skip to sidebar

I've decided that I no longer have much reason to use this blog, particularly as all my political pieces are at The Commune. The title is also rather inappropriate given my drift away from Trotskyism...

I thought I'd set up a different blog here. Obviously one person having more than one blog is mad, but I'll leave all the old stuff at this one and not delete it.

I wanted to have a space for my more asinine musings on ‘popular culture’ and sectariana (i.e. the popular culture of some terrifying dystopia where the British left is important or powerful).

Furthermore, one of my main ambitions is to feature lots of crudely ‘Marxist’ cultural reviews, in the style of Monkey Smashes Heaven and the now defunct Maoist Internationalist Movement, such as “The Jokers of the world will never destroy the system. Only communist revolution will destroy Batman and the system he represents once and for all.”

The new site will also feature a lot of gossip about the far left; YouTube videos of 80s pop hits; and reports on trips to Wetherspoons.
Posted by David Broder at 11:22 AM 6 comments: 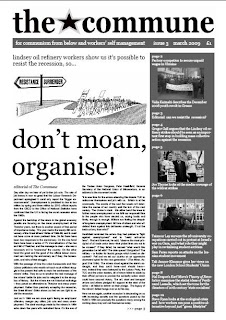 The Commune's new pamphlet on Chávez

The Commune are pleased to announce the publication of our seventh pamphlet, “The revolution delayed: a decade of Hugo Chávez”.

The pamphlet features the translation of an interview conducted with El Libertario in Caracas by the French anarchist ‘Charles Reeve’, alongside an interview with Loren Goldner, author of Ubu saved from drowning: worker insurgency and statist containment in Spain and Portugal. These documents are prefaced by a chronology of recent developments in Venezuela. Click the image below to read it online.

You can order the pamphlet for £1 + postage by writing to uncaptiveminds@gmail.com or The Commune, 2nd Floor, 145-157 St John Street, London EC1V 4PY.
Posted by David Broder at 5:36 AM 1 comment:

We are pleased to announce the publication of the second issue of The Commune.

It features articles on the Obama presidency, the war in Gaza, the labour movement resistance to the recession, attacks on welfare provision, call centre trade union organising, and much more besides.

You can order a hard copy for £1 + postage by emailing uncaptiveminds@gmail.com, or click here to read it online.
Posted by David Broder at 5:34 PM No comments:

Origins of the movement for workers' councils in Germany

Ninety years ago the German working class unseated the Kaiser and the military establishment with a series of strikes and mutinies which brought World War I to a close.

Conscripted sailors and soldiers created strike committees, and then joined with industrial workers to create workers’ councils akin to the soviets which existed during the Russian revolution. These enjoyed extensive working class participation and in some cities held power: but over the subsequent five year revolutionary wave the working class was time and again crushed by the Social Democrats and the right-wing troops it could call upon to defend capital.

For The Commune's latest pamphlet we have reprinted a seventy-year old pamphlet on the workers’ council movement produced by the Dutch GIK (Group of International Communists) accompanied by the autobiography of leading GIK member Jan Appel (a participant in the revolution and the commandeering of a ship) along with a chronology of the German revolution.

click here for pdf
Posted by David Broder at 10:34 AM No comments:

Issue 1 of The Commune

We are pleased to announce the publication of the first issue of our newspaper The Commune. You can order a printed copy (£1 per copy + postage and packing) by emailing uncaptiveminds@gmail.com or writing to The Commune, 2nd Floor, 145-157 St John Street, London EC1V 4PY.

It includes extensive coverage of the credit crunch and "state socialist" and Keynesian solutions, arguments saying nationalisation has no answers, reports on Unison and PCS actions, a piece on William Morris, arguments for social ownership, and a piece on the class struggle in Iran.

Alternatively, visit http://thecommune.wordpress.com/magazine/the-commune-issue-1/ to read the articles online or download the PDF file
Posted by David Broder at 10:03 AM No comments:

Interview with Kliman on the financial crisis

An interview with Andrew Kliman on the economic crisis is online at The Commune.

This is the main part of a new pamphlet by The Commune, discussing how the workers' movement should respond to the crisis and what we should have to say about the bailout and nationalisations.

http://thecommune.wordpress.com/2008/11/05/new-pamphlet-the-crisis-an-interview-with-andrew-kliman/
Posted by David Broder at 6:10 AM No comments:

Andrew Kliman on the credit crunch

Andrew Kliman, author of Reclaiming Marx's 'Capital', has given an interesting talk on the current economic crisis.

Click here to read "Worse than what they want you to think - a Marxist analysis of the economic crisis.
Posted by David Broder at 8:55 AM No comments:

We have produced a pamphlet on the subject of workers’ control and management, counterposing working-class power exercised from below to nationalisations by the bourgeois state.

The struggle for self-management (by Solidarity)

An exchange between Solidarity and the Institute for Workers’ Control

The ambiguities of workers’ control (by Solidarity)

The Harrogate debates: the 1977 debate between the then secretary of state for energy Tony Benn and Arthur Scargill and Peter Heathfield from the NUM on workers’ control. Includes summaries of contributions from the floor.

We have posted some of the contents on the commune already, but we have not yet uploaded the Harrogate debates piece, which represents about half the pamphlet’s length.

If you would like a copy of the 26 page pamphlet, email uncaptiveminds@googlemail.com or write to us at The Commune, 2nd Floor, 145-157 St John Street, London EC1V 4PY.
Posted by David Broder at 6:35 AM No comments:

the families of hussein ali and muhammed hussein will be attending the lobby: hussein ali committed suicide days after being forcibly returned to kurdistan on 7 august. muhammad hussein died of cancer following six years of struggle to gain refugee status in the uk.
Posted by David Broder at 5:07 PM 1 comment:

If you are interested in why I left the Alliance for Workers' Liberty, read my guest post at the Shiraz Socialist blog.

To find out more about what I am doing now, visit the website of The Commune
Posted by David Broder at 3:02 AM 14 comments: